He was watching a long row of traveling, flickering lights, loving the way they punctured the wooded darkness in their unique winking and twinkling way, wondering where the time had gone. He was turning sixty in a few weeks, and never before had he felt so old, so tired, so beaten down.

How many more years he could do his job? Immediately, he laughed in spite of himself. He already knew he would do it until the day he died.

The glitterings were from the flashlights, lanterns, and in these modern days, cell phone screens that accompanied every group of campers at night. They undulated and crept ever closer, down the grassy embankment and now across the little wooden bridge. It seemed as if it were the lights themselves that were somehow alive rather than the dozens of human hands that carried them.

He thought once again how the approaching crowd looked like an enormous, majestic centipede. Its blue-white glow seemed to be from some kind of divine providence, as all those legs and feet crossed and re-crossed each other under the multitude of speckled illuminations. Beautiful, in its way, he loved the sight with every fiber of his being.

“They’re coming,” he said to no one in particular.

At first, the only replies were the distant echo of the children’s constant laughter and another gust of brisk wind that stiffened the edges of the leaves, as they fell to the surface of the camp’s little lake. Then his oldest friend and comrade – Nathan was his name – responded from behind him.

Nick didn’t react. The dwindling numbers over the years had become a concern to them all. The first of the lights – the head of the centipede, if you will – had reached the near side of the lake and had turned towards them.

“How many?” Nathan pushed.

Nick’s response was immediate, as if he’d been waiting all evening for that exact question. And for what must have been the millionth time in their relationship, he wondered if perhaps Nathan really could read his mind. “Two-oh-one,” he replied.

Nathan whistled softly against that chilled breeze. “Jesus, only one extra? What’ll we do if we ever drop below…”

“We’ll take from the staff.”

Nathan’s level of shock was surpassed only by the ease with which he assimilated the notion. “Right,” he said. “Jesus. I mean… What else could we do? C.F.M., right?”

Another of their crew, Alyssa, came up and stood beside Nathan.

“Small group,” she commented, but neither Nick nor Nathan opted to elaborate, her words dying quickly in the relative stillness of the night.

The silence that lingered thereafter was broken only by the growing noise of the incoming children and another gust of that freezing, bitter wind. Finally, as the first thin, shaking beams of light shone in all their faces, Nick abruptly ended his yearly ritual.

“Let’s get this done,” he said, and neither of his long-time companions said anything.

Seconds later, Nick was standing alone under the welcome archway that led to the ring of benches surrounding the giant fire pit.
THE TWO HUNDRED
​Nick has been hosting the Camp Mason bonfire for so many years they all tend to blend together. He is old, now, and weary. He wants to quit. But he can't. He has an annual penance he must pay.
This year, only 201 visiting school children and their accompanying adult chaperones will be there. It's a number that scares Nick because it's all-too close to the number he knows by heart... the number that has been forever burned into his mind.
​ 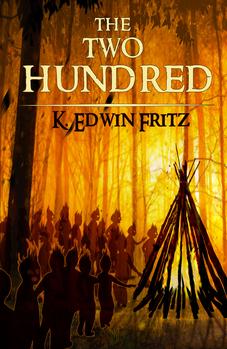